By nature I am not very brave.

When I was a teenager, I got my private pilot's license. One of my main motivations was that I was afraid of heights and wanted to confront my fears. It didn't work. I'm still afraid of heights, but now I have a much better idea what can go wrong whenever I travel by plane. So that backfired.

A few years ago I was reading Calvin's Institutes, and I found this:

In this way, and in no other, can the immoderate and superstitious fears, excited by the dangers to which we are exposed, be calmed or subdued. I say superstitious fears. For such they are, as often as the dangers threatened by any created objects inspire us with such terror, that we tremble as if they had in themselves a power to hurt us, or could hurt at random or by chance; or as if we had not in God a sufficient protection against them. (Book 1, Chapter 16).

It struck me that Calvin was saying, every fear – except the fear of God – is superstitious fear. If I am afraid of something, it is because I believe that it can hurt me. Can it? Only if God allows it.

If you haven't time to or inclination to read Darby, please take time to read "Two Warnings and an Example" (Collected Writings, Volume 12, pp. 145–151). It's well worth the time and effort to read. He says this about the Lord Jesus praying in Gethsemane:

being in an agony, He prays the more earnestly; it drives Him to His Father; and that before the trial comes. Then what is the next thing? When the trial actually comes, it is already gone through with God! He presents Himself before them saying, "whom seek ye?" as calmly as if going to work a miracle. Whether before Caiaphas or Pontius Pilate, He makes a good confession; owns Himself Son of God before the Jews, and King before Pilate.

This, according to Darby, is the key to suffering: to go through it with the Lord before it happens, so we can see it as coming from Him. He says it better than Calvin, but it's essentially the same advice: if we see everything as coming from God, then we can accept them as the Father's will for us.

I'm not by any means claiming to be brave. But I am finding myself acting more courageously as I learn to accept things from God's hand. I frequently have to remind myself that if I fear God, then there's no fear left to give whatever thing frightens me.

I recently cut down a big tree. It has been dead a long time, and I figured if I cut it down, then I'll get firewood from it. If I just leave it alone, it'll eventually fall anyway, but it'll be too rotten to be of use to me. Either way the tree comes down, but if I bring it down myself, I can at least keep warm from it. 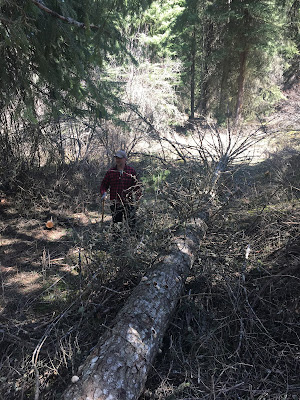 Cutting down trees is inherently risky. If there's a time when saying "Lord willing" isn't taking the Lord's name in vain, it's when I point to where I want the tree to fall and say, "It'll fall there, Lord willing." But where I once gibbered like an idiot at the thought of doing something so very scary, I now find myself approaching it with a whole lot of prayer, and a willingness to accept the blessing God has for me. Our Heavenly Father isn't going to let a tree kill me, unless He specifically wants the tree to kill me, in which case that's the very best thing that can happen. So I don't act foolishly: I take every precaution, and I work slowly and carefully. But I don't shie away from the task either. I am taking my responsibility seriously to maintain the land He has given me, and I am doing it in fear and dependence on Him.

A most profound concept:

"...if I fear God, then there's no fear left to give whatever thing frightens me."

Thank you for this.

Some Links of Interest

clumsy ox
An unremarkable person living in the middle of nowhere.