I mentioned last time that we seem content with a "gospel" that doesn't even rise to the level of the Old Testament. We seem afraid even to teach and declare what Romans 4:1–8 teaches. But even if we fearlessly declare Romans 4:1–8, we still have only gotten as far as the Old Testament. To use the Exodus metaphor, we bring people to Succoth, or perhaps all the way to Etham (Exodus 13:20), and then we try to assure them that they've gotten all God has for them. But of course it's not true. 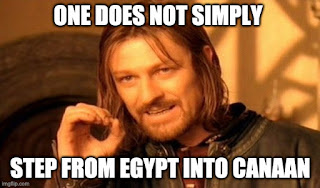 Someone who hasn't seen the enemy dead on the shore might well be born again. She might well be justified in God's sight, redeemed, regenerated, and forgiven of all her sins for eternity. But she's not saved. Romans doesn't just end at Romans 5:1, and we shouldn't stop there either.

Don't let's forget Colossians 2:6 – we are to walk as we have received. And we must keep Galatians 3:1–3 in mind – we don't start out on one principle and finish on another. We are certainly saved by faith, just as surely as we're justified by faith (Ephesians 2:8–9). It's not that we start out by faith and then earn salvation. But the fact remains that there is progress from justification to salvation.

When we go to the next chapter, we are brought face-to-face with baptism immediately (Romans 6:3). We recall that 1 Corinthians 10:1–2 describes the crossing of the Red Sea as baptism, so it's no stretch at all to say that Romans 6–8 answers to Exodus 14. In other words, we're now talking about salvation.

Romans 5:19–21 sets the stage for Romans 6:1–9. We find in Romans 5 that Adam's sin made us all sinners, regardless of our actual guilt. I realize there are many who believe that we are all guilty of Adam's sin, but I don't read that in Scripture. Romans 5 doesn't say that God holds me guilty of what Adam has done, but that Adam's sin made me a sinner. And we read that sin has reigned (Romans 5:21). This theme of sin personified as a master is carried into Romans 6, where we find that the solution to the problem of sin reigning is to put to death the one who had been sin's slave (Romans 6:5–6). Notice Romans 6 doesn't teach that sin has been crucified, nor even that sin is judged. We don't get the condemnation of sin until Romans 8:3, and even then, we realize (Romans 8:23) that while sin has been judged, the judgement hasn't yet been executed. Romans 6 strikes not at sin, but at the sinner. It's about the servant of sin, the man I used to be.

Whether I believe it or not, God sees that I have died with Christ (Galatians 2:20, Colossians 3:1–3). But Romans 6:11 commands us to "reckon" that to be true. What that really means is, for us to experience the salvation that God has for us, we need to see things the way He sees them, the way He says they really are.

Exodus 14:31 goes on to say (as cg commented earlier), that when the Israelites saw the enemy dead on the shore, they feared God, and believed in God, and in Moses His servant.

Romans 4:5 says that God justifies the one who "believes on him who justifies the ungodly." Revelation 14:6–7 tells us the "everlasting gospel" – fear God and give Him glory. Notice in both Romans 4:5 and in Revelation 14:6–7, the issue isn't so much what we believe, but whom we believe. When we get to Romans 6:1–11, the issue is still faith (remember, we are to walk as we received), but now it's much more specific about what we are to believe.  We are called to believe that we have been crucified with Christ (Romans 6:11).

So let's be perfectly clear: we are saved by grace through faith (Ephesians 2:8–9). The question isn't one of faith followed by works; it's faith from start to finish. But the journey that starts with justification (by faith) and goes on to salvation (by faith) isn't a single step. It may take many years for a person to believe God (thus being justified in His sight) to having peace with God, to being saved, having seen the bodies of the enemy dead on the shore. All of these are by faith, but they're not all the same step.

I was justified as a very young person, having believed the gospel. But it was at least fifteen years before I (as an adult) saw that I had been crucified with Christ. At any point in that span of time, I would have said (and did, indeed, say) that I was saved, but I don't believe I was. I was born again. I was forgiven of all my sins. I was righteous in God's sight. Had I died in that time, I would have found myself safe in God's presence. My eternal destiny was settled. But I wasn't saved. I didn't see myself as having died with Christ (I thought that was an aspirational statement about a holy life). I hadn't seen the enemies dead on the shore.

And I think that's one reason I keep ranting about being careful with words like "saved." There are consequences to carelessness in holy things.

Some Links of Interest

clumsy ox
An unremarkable person living in the middle of nowhere.